This content is part of the Essential Guide: Guide to enterprise mobile app development and SOA

Biotechnology leader Genentech uses human genetic information to develop medicine to treat people afflicted with life-threatening ailments. The company's mobile program is cutting-edge too, dating back to the iPhone itself, according to Christian Santiago, Genentech's mobile Web technical lead in the enterprise mobility group.

With the CIO already on board, the company didn't need a prescription for a mobile Web application or native iOS development. Instead, Genentech looked forward to see what it could do to help improve the lives and productivity of its employees

It's not surprising that a biotechnology company knows a thing or two about experimentation and following up on a hunch. Genentech doesn't have a bring-your-own-device policy because it has a fairly large iOS deployment, so the creation of its own applications was really a trial in an effort to be a game changer.

There is a plethora of options on the market designed to meet the needs of various businesses. Since Genentech has been developing its own applications for a while, the organization decided it was time to use standardized frameworks. Santiago said her team had some hard criteria for the framework it wanted to use. "It had to be Web-based, so: HTML, JavaScript, CSS," she said. "Our main development force is very well-versed in Web technology, particularly Java."

Genentech also needed to choose a product that would align with its internal corporate culture. While some organizations may like having a framework that is ready to go out of the box, that wouldn't be a good fit for the biotechnology company who wanted something flexible in both look and feel.

"For internal apps, we try to bring a sense of fun to employees, so we give them an interesting name and give them their own icon," Santiago said. "They look a lot like consumer apps." 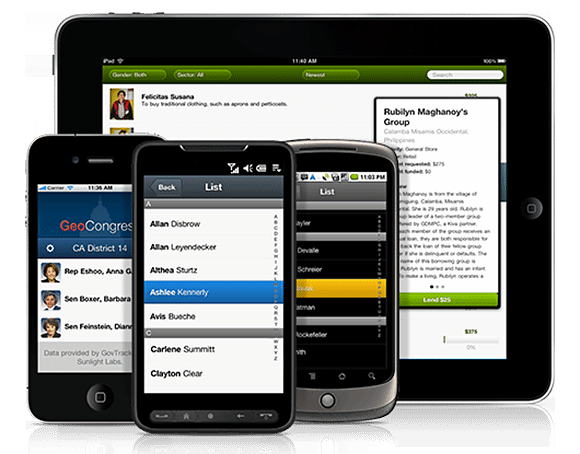 While it's currently not a huge concern for Genentech, the team wanted to make sure the solution would be compatible with native packing tools and has the option to create hybrid applications.

Once Santiago knew what features she wanted in a framework, she conducted market research with a developer survey and narrowed down the search to three vendors: jQuery Mobile, Sencha Touch and Appcelerator Titanium. With the shortlist in hand, Santiago's team performed tests to see which product would best meet Genentech's needs.

"We did some sample projects on each one to see which felt the best in terms of developing something and getting started," Santiago said. "We went through the experience of solving a problem by looking at forums, looking through documentation to solve a problem, and then playing with the framework and testing its performance."

Ultimately, Santiago's team decided to move forward with Sencha Touch, in part because of the time saved by using the product. "The impetus for adopting an HTML5 framework was meeting demand. We needed something to be able to ramp up quickly," Santiago said. "Our goal is to be able to do 10 to 15 apps a year at some point, so we really want to be able to create more apps than we've been able to before."

Another differentiating factor for Santiago was the level of customer support. She noted how important it was for her and her team to be able to go into a forum and see the vendor quickly answering questions and taking good care of its customers.

Despite the controversy in the development community around HTML5, Santiago is confident she made the right decision. "HTML5 was a wise investment," she said. "I don't think I could go in a different direction and get the same results."

Santiago described the transition to the new framework as smooth. In fact, she believes her team is ready to pick up steam as a result.

"I think we are really at the point where we can put together an application once we have a design, start to finish, in six weeks," Santiago said. "We are working on sort of upping our game a bit and enlarging this to other development teams in the company."

More on this topic

JustinWilson07 - 30 May 2016 5:11 AM
Yes we have a team of dedicated individuals who develop mobile applications and yes the mobile app for our company has been developed by our internal team.
[-]

Maxine Giza - 31 May 2016 8:30 AM
Justin, what kind of features does your company app have? What prompted the organization to create one?
[-]

ncberns - 31 May 2016 9:01 AM
My company? No. My industry? Yes, though to my knowledge all those apps were made for us by third-parties. With teams spreadi around the world, we're almost entirely mobile and inundated with great apps for phones and tablets. All those apps cover almost every phase of our business cycle, from writing to scheduling, from budgeting to cost tracking, from petty cash distribution to accounting, from distribution to sales. Some even wake up our production crew so we can get the day's work done.
[-]

Maxine Giza - 31 May 2016 9:22 AM
Apps are so prevalent nowadays. It kind of makes you wonder how we functioned before their existence!
[-]

AnonymousUser - 28 Aug 2013 2:11 AM
The big controversial topic on mobile industry is where to go with HTML5 or with native apps. See the link for the solution for the topic http://blog.contus.com/html5-or-native-for-mobile-app-development/. Native apps have been a favorite mode of application distribution on smartphones. Users have had a rich and productive experience using native apps that are developed on the respective mobile platform. Find more interesting apps here: http://www.contus.com/mobile-application-development.php
[-]