This content is part of the Essential Guide: Change agents: Leaders in information management technology

You've got mail! Chances are, a number of messages flooding people's inboxes today aren't from friends and family, but from marketers. James Thompson, messaging operations director for Infusionsoft, helps make sure customers' targeted emails are opened. The company's messaging platform, Postfix, had been sufficient to meet that goal for years, but began to falter. In a recent project, Thompson had to find and implement a messaging platform that could scale and handle compliance and new technologies better.

Sifting through the junk

Postfix ran on a custom Linux-based operating system (OS). The open source email software made it possible to load data on any server and start sending email through it. "It's OK at doing smaller amounts of mail, but you are really not going to get efficiency on the scale we were starting to summit," Thompson said.

There were three things that were very important to Thompson when he was looking at third-party email messaging platform vendors: redundancy, scalability and uptime. That means making sure the application is up and running as it should be and sending emails. "If something happened, we don't have to jump in and firefight manually," Thompson said, elaborating on the importance of having a product that could handle cutover in the event of a disaster.

After reviewing and speaking with potential messaging platform vendors, Port 25 and Message Systems were the final two in the running. Message Systems ultimately came out on top, primarily because the software was more user-friendly and Thompson liked the value the company placed on support. Furthermore, Thompson said, at the time, Message Systems was more advanced than its competitors in terms of offering analytics data.

While Message Systems provided "documentation galore," Thompson really appreciated the close guidance. "Like all companies, we like to think we are special. We expect the same with the implementing," Thompson said. "We want extra hand-holding, all that."

Enterprise support is definitely a must in this world.

Message Systems' software engineers helped Thompson create a technical project plan. The implementation of Message Systems allowed Thompson to replace the company's old messaging system with one that is new, fast, powerful and can provide data analytics insights into its email environment.

Two big things happened after the implementation that made the decision to go with a third-party provider seem worthwhile. "What we actually found is that once we implemented Message Systems primarily for their email delivery technology, we were able to reduce those seven machines that were running Postfix down to basically two email servers," Thompson said.

In fact, a single server can handle the company's current load. Two servers are used, however, according to Thompson, because he wanted to have a "backbone" in place should something go down. "We can have the other one up and running and taking on the full load no problem, no time at all."

Scalability was the second perk to making the switch. "We just earlier last month reported our highest email volume week ever," Thompson said. "Before we were pushing about 10 million with seven severs, we pushed over 98 million in the same time period of about a week, on those exact same two servers. So the scalability of the system has been awesome for us." 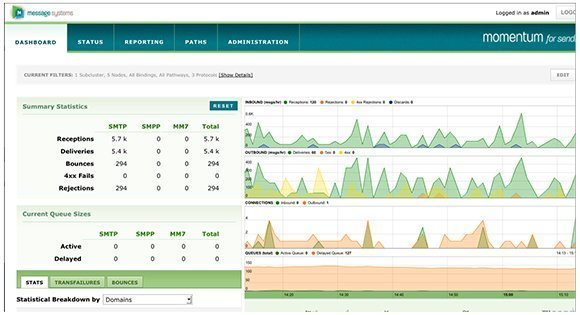 Some changes have been made since the initial implementation, including an add-on module. With the Momentum platform, it's possible for Thompson to track successful deliveries, ISP blocks and other data points. Since the previously used custom OS didn't support Message Systems, a switch to CentOS Linux boxes was necessary.

Advice for choosing a service provider

"Let's say one day Yahoo has issues and they can't accept very much email within an hour or within 24 hours. They then look to what is called rate limiting," Thompson said. "This logic and adaptability can look for variable bounces like that and say, 'OK, well, thanks, Yahoo, for telling me about it. I am actually going to cut down on how many messages I am going to send to Yahoo per hour.'"

There isn't too much Thompson would do differently is faced with the same scenario; however, he would advise others to keep the big picture in mind. Initially there was a bit of a sticker shock at the added expense of enterprise-level support. That being said, in Thompson's mind, the money has been wisely spent, as it helps hold Infusionsoft's reputation. "If redundancy and up time are big issue for anybody else looking for this service or anything similar, enterprise support is definitely a must in this world," he said.

About the author:
Maxine Giza is the associate site editor for SearchSOA.com and can be reached at mgiza@techtarget.com.

Maxine Giza - 23 Jan 2014 5:48 AM
Is your organization looking to upgrade its messaging platform?