SOA-based development of applications is quite common today. However, lacking suitable APIs to develop them, developers often find it difficult to adopt an SOA-based approach. With introduction of Service Component Architecture (SCA) and Service Data Objects (SDO), it has become simpler and more powerful for developers to develop SOA applications.

SDO is all about accessing heterogeneous data uniformly. It essentially simplifies the data model and abstracts data based on an SOA model. It offers:

SDO is a framework which not only abstracts data from its sources. but is also extensible and can be integrated with new data and its sources. It allows to access from multiple data sources like relational databases, XML, Web Services, etc.

At the architecture level, SDO represents all data in the form of graphs using Data Mediator Services (DMS). SDO clients (or objects) operate only on these data graphs and do not deal with original data sources or formats (which might be persisted or even serialized). Changes in graphs are automatically written back to data sources. Hence, under the model of "disconnected data graphs," it separates data source and data handler. It also provides a metadata API to handle graphs and data model.

The Figure 1 shows the various components that make an ERP application. The components (except client) form the server components. The server can be classified under two broad categories. They are: 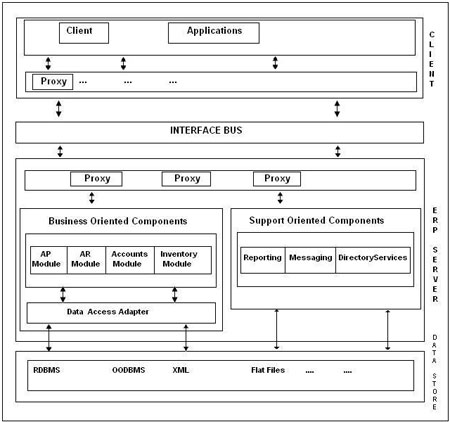 It provides an entry point for using the Reporting Service component by other modules. The main objective of this component is to fetch data and set properties specific to layout and elements. The following are kind of services it offers:

The layout and display logic uses the services of both the rendering API and object mapping API to generate a report.

Any XML parser can be used to load an XML document into the memory. When the document is loaded, its information can be retrieved and manipulated by the object mapping API. This represents a tree view of the template. The object graph generated by this API is used by the layout and display logic component to access the elements of the template.

The rendering API is a programming interface for contexts. It defines the way a context can be accessed. The API can be used in the creation of, writing to and destroying of contexts. The objective is to provide a generic programming interface (context independent) for accessing different context rendering APIs (like HTML, PDF or CSV). With this, a user can create, write and release contexts without actually knowing the actual context-related API. For example, if the report output has to be in PDF format then user just needs to use this generic wrapper, which in turn routes the request to the PDF-rendering API. 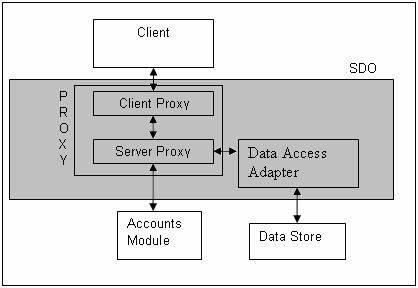 Each request made by a client to server is called a transaction. During an initial transaction, the server fetches all the data and caches it with the proxy (client and server) as an entity graph, which is a collection of entities. Each entity is similar to a row. An entity, apart from the data, is associated with metadata, which allows it to be introspected for information about data types, data relations and data constraints.

The entity graph keeps track of the modifications, new additions and deletions made to it. At the end of the transaction, the metadata API, which is associated to metadata, will automatically generate a query based on the modifications. The client proxy then sends this query to server proxy, which in turn updates its local entity graph. Then the server proxy publishes these modifications to all the clients registered for that event. The conflicts during updating at the server side are resolved based on time stamps. At a predefined interval, the changes at the server cache are replicated to the data store through a data access adapter (which provides access to the data store). The next time a request is made by a client, the proxies serve the request from its local entity graph.

Technology independence from a developer perspective

Vijaya Bhaskar Peddinti is a Software Engineer with Web Services Centre of Excellence in SET Labs, Infosys Technologies Ltd. in Hyderabad, India. His experience has been in product development of various sizes based on SCA. He can be reached at vijayabhaskar_p01@infosys.com.

Shaurabh Bharti is a Junior Research Associate at Software Engineering and Technology Labs, Infosys Technologies Ltd. He works with Web Services and SOA Center of Excellence. His current research interests include Semantic Web and SOA, Web Ssrvice standards and contextual collaboration. He can be contacted at Shaurabh_Bharti@infosys.com.

Mohit Chawla is a software engineer with the Web Services Center of Excellence at Infosys Technologies Ltd.. His primary area of interest is SOA, with specific focus on Web services implementations on various platforms. He has also actively participated in publishing in leading international conferences. He can be reached at mohit_chawla@infosys.com.